*Plus freight – Please contact us to complete the order. Cost is an estimate. 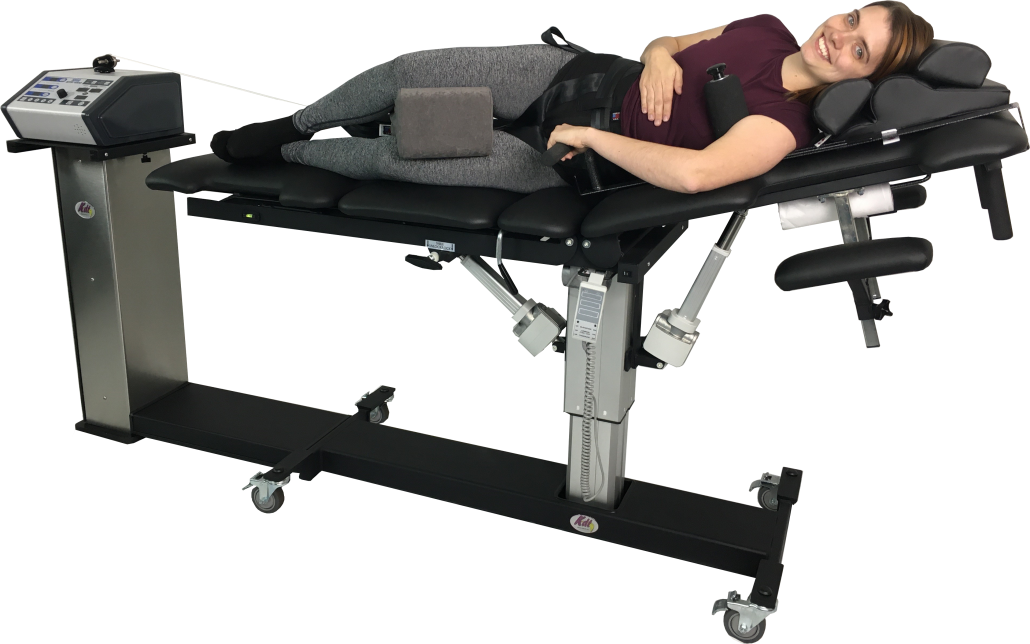 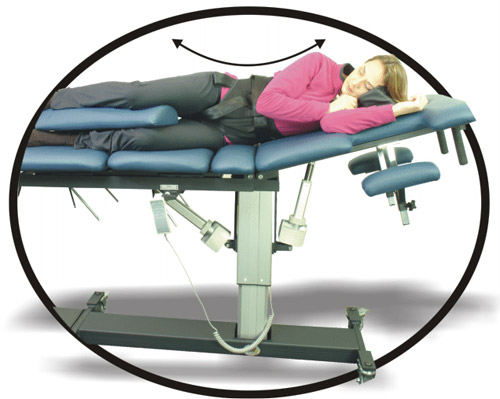 As with adjusting there are not an infinite number of positions available to treat a patient during decompression (traction). Supine, prone and side-lying pretty much describe it. However when discussing axial traction therapy side-position treatment remains a bit elusive and under used. We believe there should be a greater appreciation for this variant traction application. Also the side-position must be understood primarily as a transitional position utilized due to an impediment to the conventional postures and as perhaps a “safe test” posture. Overall a diminished “traction reaction” from side-lying decompression makes it a good initial choice in more acute or nebulous-classification conditions.

Also IF the patient reports benefit from rest (or recumbent positioning i.e. a reasonable differential between HNP or “outer annular disc sprain”) an elongated, low-force side traction session with attendant Estim (I.F.) For 15-18 minutes often gives remarkable (short-term) relief.
Firstly side sleeping (fetal position) is far and away the most common sleep position. Most adults need to train themselves to remain supine…which may have some advantages in terms of the spine but a disadvantage in terms of GERD, snoring and apnea/hypopnea. We don’t necessarily rely on sleep position to dictate decompression-position, but it does play into our figuring. Most adults tend not to stay prone through an entire sleep cycle, and given the strain of sustained head rotation and breathing impairment most prone-sleepers actually assume a rotational, so-called Swastika position not true prone. Interestingly many non-prone sleepers find themselves comforted in that sleep position during acute and sub-acute episodes of disc related pain. Thus the question of “what position do you sleep in” can have an impact on our recognizing an extension directional preference, or lack thereof. Since the Swastika and side-lying positions tend to de-stress the lower back in a similar fashion we often opt for side-position traction in the first 1-4 sessions for patients in more acute pain, those whose exam reveals a potential adverse reaction to supine (or prone) and those who describe laying; “other than on my (left or right) side” as “impossible”.

Secondly and very importantly the so-called “medial disc” (actually describing the disc’s impaction on the nerve root; medial showing antalgic deformity into the same side as the leg symptom) may be worsened by both typical prone or supine axial traction. IF the antalgia is on the same side as the leg symptom and you elongate or straighten the spine the pressure on the nerve will certainly worsen (thus the need for the patient to stay bent). This contrasted to the more common lateral antalgia (bending away from the side of pain. This antalgia being found in the vast majority of cases where somatic referral disc pain, not radicular pain, is present).
The assumption that you can contour the patient or the table to the antalgia is overruled as soon as you initiate axial tension and recognize the pain beginning again (thus tables that laterally flex or circumduct tend to be of limited efficacy…and unnecessarily more expensive). We also tend to find contralateral SLR positive in these cases indicative of a space-taking lesion and often coincident with a weak or non-apparent extension directional preference.

So our patient classification for side-position traction involves how dogged the patient avoids any position BUT side-lying, how the antalgia manifests and how likely a moderate or severe post traction reaction is. We preliminarily check for directional preference and standing pain/provocation as well as query the patient as to their general symptoms after arising from sleep or a mid-day nap. Typically IF there is decided improvement it suggests axial traction should be tolerated. However the traction tension, if too forceful or accompanied by several minutes in a disagreeable posture can severely breach our promise to “first do no harm”.
Opting for side-positioning in cases of acute referral pain syndromes (discal) or in those cases where arising from sleep or rest triggers an adverse pain reaction is only sensible. It is doubly so in cases where an acute or sub acute disc sprain (outer wall tear with out nuclear migration or annular distention) may be giving a dubious classification picture, but most assuredly a long, higher force supine session will spell disaster. Its’ been my experience any adverse reaction when side-positioned is always far less than from any conventional position. Also intuitively far less core muscle action is required to lift upright from the side position.

We also can make deductions of a side-lying differential if we find a lateral bending preference. Lateral bending can be as prognostic for the benefit of traction as any single finding. Often as the patient bends laterally (in a preferential direction) they either restore upright posture or improve their antalgia markedly. This often suggests axial traction can be of benefit but its very important to be aware of the medial nerve displacement.

1) We utilize a specialized belt and belting procedure which minimizes any adverse pressure into the pubic region or lower back and makes the process quick and unconfused.

2) We determine which side will be up (or conversely which will be down) and have the patient slowly and comfortably assume it. This may be judged typically by asking the patient which side they have concluded is most comfortable. IF either side is OK I typically chose the side of pain UP especially if there appears to be a far-lateral disc displacement. We make a rudimentary assumption the upper side (side not on the table) experiences slightly more “pull”…thus if the displacement is on the right we tend to want the migration to move left…thus put the right side up.

3) We place a contour pillow between their thighs to hold the pelvis and hips parallel and have them draw their knees up and out to the most comfortable and stable position possible.

4) We elevate the cranial table section to assume the antalgia we are trying to maintain (most imperative in medial presentations). It’s important to note the importance of the table section being able to pivot from the waist and not at the mid-rib cage. This assures the best possible maintenance of the antalgia.

5) And we elevate the table parallel to the pulling motor and support the head with a pillow and the upper torso with either a non-slip traction block or an axilla post that buttresses them from any caudle slippage (though at the modest poundage recommended little offset is required initially. If tolerance is good but relief is not apparent adding more force is an option, however use of the torso wing-vest becomes necessary at 50+ pounds). As the pull progresses the patient will feel a tension at the pelvic brim and lower back. Their comfort and the sensation on the effected area should dictate how much force is added and how long to keep them down. Comfort or reduction in pain is always a positive sign however as long as the patient can smoothly and adroitly arise…and with no additional distress then 2-3 further sessions of the side position would be warranted prior to transitioning to the conventional prone or supine posture.

*Plus freight – Please contact us to complete the order. Cost is an estimate.